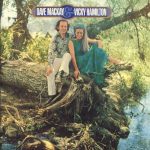 Dave MacKay & Vicky Hamilton self titled album was the first album, released in 1969 on Impulse.