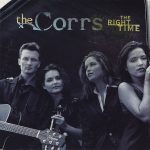 “The Right Time” is a song by Celtic folk rock band The Corrs, the third single from their debut album Forgiven, Not Forgotten. It was released in 1996 and the track was remixed for airplay. The remix replaced a light and breezy rhythm with a hard-pounding beat coupled with reggae-style bass. The remix was produced by Per Adebratt, Tommy Ekman, and Douglas Carr, who had previously worked with Ace of Base. The song was featured in their live set for several years.

“The Right Time” was targeted at pop radio by Atlantic US, hence the video theme of 1960s pop tinged with psychedelic, and the band’s new haircuts and publicity photos. The new style lasted around a week before the Corrs’ classic look returned. The video for the track was originally filmed and released with the “Radio Edit – Dance Mix” version; promotion was done with this version too. The album edit video can be found on the Best of The Corrs DVD.

Warner’s International territories released “Forgiven, Not Forgotten” as the second single from the album of the same name, while Atlantic US went straight to “The Right Time”.

The single was a commercial failure in the United States, it failed to enter the Billboard Hot 100 and barely entered the Adult Top 40 chart, inching to number 37