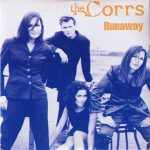 “Runaway” is the debut single by the Irish family band The Corrs. It was released in September 1995 and had middling chart success except in Ireland and Australia, peaking at number 10 in both counties. It was also a big adult contemporary hit in Canada, reaching number two on the RPM Adult Contemporary Tracks chart. On the UK Singles Chart, it originally reached number 49, but a re-release in 1999 saw the single reach a new peak of number two on the same chart.