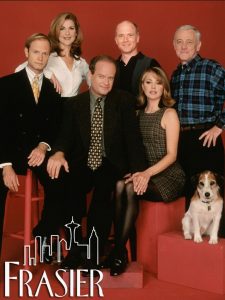 Frasier is an American sitcom that was broadcast on NBC for 11 seasons, premiering on September 16, 1993, and concluding on May 13, 2004. The program was created and produced by David Angell, Peter Casey, and David Lee (as Grub Street Productions) in association with Grammnet (2004) and Paramount Network Television. The series was created as a spin-off of Cheers, continuing the story of psychiatrist Frasier Crane as he returned to his hometown of Seattle and started building a new life as a radio advice show host while reconnecting with his father and brother and making new friends. Frasier stars Kelsey Grammer, Jane Leeves, David Hyde Pierce, Peri Gilpin, and John Mahoney. The show was critically acclaimed, with the show itself and the cast winning thirty-seven Primetime Emmy Awards, a record at the time for a scripted series. It also won the Primetime Emmy Award for Outstanding Comedy Series for five consecutive years. As of 2019, the possibility of a revival is being discussed.