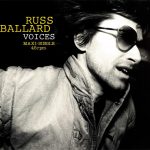 “Voices” is a single by Russ Ballard, from his selftitled album, released in 1984. It peaked at #110 in the US Billboard Charts and #95 in UK Charts.

Russell Glyn “Russ” Ballard (31 October 1945) is an English singer, songwriter and musician. Originally coming to prominence as the lead singer and guitarist for the band Argent, Ballard became known by the late 1970s as a songwriter and producer. His compositions “New York Groove”, “You Can Do Magic”, “Since You Been Gone”, “Winning”, “I […]