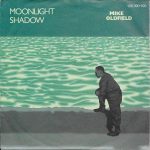 “Moonlight Shadow” is a song written and performed by English multi-instrumentalist Mike Oldfield, released as a single in May 1983 by Virgin Records, and included in the album Crises of the same year. The vocals were performed by Scottish vocalist Maggie Reilly, who had collaborated with Mike Oldfield since 1980. It is Oldfield’s most successful single, reaching number one on a number of charts around Europe.