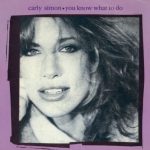 “You Know What To Do” is a song written by Carly Simon, Jacob Brackman, Peter Wood, and Mike Mainieri, and performed by Simon. The song served as the lead single from Simon’s 11th studio album, Hello Big Man.

Hello Big Man is singer-songwriter Carly Simon‘s twelfth album, and eleventh studio album, released in 1983. The album was Simon’s last for Warner Bros. Records (and for what became the Warner Music Group, having also spent time with Elektra Records), as it was a commercial disappointment upon release, despite a positive reception from critics. The […]