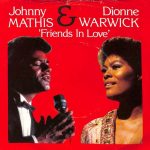 Friends in Love, Dionne Warwick‘s third studio album for the Arista label, was released in 1982. It was recorded during the winter of 1981-82 and was released that spring. The LP was originally issued as number AL 9585 in the Arista Catalog. The disc stalled at a disappointing #87 on the Billboard album chart, selling […]