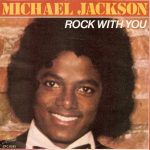 “Rock with You” is a song recorded by American singer Michael Jackson. It was written by Rod Temperton and produced by Quincy Jones. It was first offered to Karen Carpenter, while she was working on her first solo album, but she turned it down. It was released on November 3, 1979, by Epic Records as the second single from Jackson’s fifth solo studio album Off the Wall (1979). It was also the third number-one hit of the 1980s a decade whose pop singles chart would soon be dominated by Jackson.

It reached number one on both the US Billboard pop and R&B charts. On the former, “Rock with You” spent four consecutive weeks at number one starting January 19, 1980. According to Billboard, the song was the fourth biggest single of 1980. It is also considered one of the last hits of the disco era