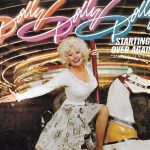 “Starting Over Again” is a song recorded by American entertainer Dolly Parton. The song was written by Donna Summer and her husband Bruce Sudano. Parton’s recording was performed as a slow tempo ballad, gradually building to a dramatic crescendo. It was released in March 1980 as the first single from her album Dolly, Dolly, Dolly. “Starting Over Again” made the U.S. pop top forty, peaking at number 36, and reached number 1 on the U.S. country charts on May 24, 1980.

Donna Summer also recorded it as a non-album track, performing it live numerous time on television specials during the 1980s, including her own program, The Donna Summer Show.

Dolly, Dolly, Dolly, released in 1980, is the 22nd solo studio album by Dolly Parton. Coming at the height of her late 1970s-1980s quest for pop success, the album was her least traditional country-sounding album to that point, with a number of songs bordering on disco. Though the album’s two singles, “Starting Over Again” (written […]