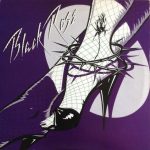 Black Rose is the lone album by the rock band Black Rose, whose lead singer was American singer-actress Cher. The album was released on August 21, 1980 by Casablanca Records. Unlike Cher’s previous solo records (such as Take Me Home) the album was a commercial failure. It failed to chart and has sold only 400,000 copies worldwide.

In 1980 Cher and her part-time boyfriend Les Dudek wanted to form a band called Black Rose.

The band, before signing a contract with Casablanca Records, was an independent rock band that played in small clubs around Los Angeles and tried to make it without trading on Cher’s celebrity. Besides Cher, the other band members were Les Dudek, Gary Ferguson, Michael Finnigan, Warren Ham, Rocket Ritchotte and Trey Thompson.

Black Rose, the last of Cher’s albums released by the Casablanca Records, was produced by James Newton Howard. Her name never appeared on the album cover and Cher’s face was only seen in a band photo on the back cover. The album is Cher’s first album with a rock sound, that would characterize her future Geffen-era albums. The album was a flop and Cher fans were unaware of the project. After the failure of the album the band broke up the following year. In Germany, Spectrum Records re-released the Black Rose album, completely intact, for the first time on a CD. It was packaged with a photo of Cher singing in concert and marketed as a Cher album, instead of as a Black Rose album.