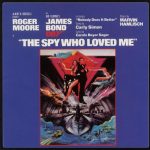 The film’s soundtrack was composed by Marvin Hamlisch, who filled in for veteran John Barry due to his being unavailable for work in the United Kingdom due to tax reasons. The soundtrack, in comparison to other Bond films of the time, is more disco-oriented and included a new disco rendition of the “James Bond Theme”, titled “Bond 77”.

An element of the Barry style remains in the suspenseful film sequence in which Bond and Amasova try to track down Jaws at an antiquated site in Egypt. The accompanying Hamlisch music echoes Barry’s “Stalking,” from the pre-credit fantasy sequence of From Russia with Love, featuring Bond (Sean Connery) and villain Red Grant (Robert Shaw).

A large percentage of the music in the film was re-recorded for the soundtrack album and, therefore, does not sound exactly like the music in the film, the track “Bond ’77” being the most obvious. It is a cue that was recorded several times specifically for different moments of the film (the opening ski chase, the car chase on land, then underwater and the gun battle with the troops on the Liparus). The soundtrack album uses a different ‘medley’ version, slower in pace, which features aspects of most of the variations of the track used throughout the film, compiled into one song. This version was also released as a 7″ single on United Artists records (the track “Ride to Atlantis” was the B-Side). The main theme by Simon also differs in the film; it has a fade out on the album/single but in the film’s opening titles, it has a more abrupt ending, finishing with a long electronic note. The track “Anya” on the album does not feature in the film. There are also many cues used in the film that have yet to appear on any soundtrack release.

The “Bond ’77” recordings featuring in the film are the soundtrack’s most disco-influenced part; the rest is every bit as classic as any Barry Bond soundtrack featuring high brass, lush strings and sweeping melodies. The soundtrack to the 1981 Bond film For Your Eyes Only by Bill Conti is far more disco-oriented, featuring funky guitars, bongos and a lot of electronic synthesizers.

Jeffrey Porcaro in an interview: “As far as electronics go, I just did a bunch of records using the Syndrum. I was one of the first guys to see the prototype of that. Jim Keltner, Hal Blaine and myself were using those in recording when the prototypes came out. Now, everybody is using them. That Carly Simon tune, Nobody Does It Better, was one of the things I did using the Syndrum. The new Hall and Oates, Boz Scaggs, and Leo Sayer albums have it all over the place. They’re the best electronic drums I’ve heard or played. You can get them to sound just like a drum.”

Unfortunately not all musicians are credited on this soundtrack.

1 Nobody Does It Better

5 Nobody Does It Better (Instrumental)

11 End Titles – Nobody Does It Better