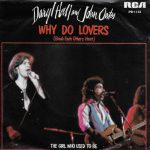 “Why Do Lovers Break Each Other’s Heart?” is a song by Hall & Oates released in 1977.  The single was taken from their album Beauty On A Back Street. It peakes at #73 in the US Billboard Charts.

Beauty on a Back Street is the sixth studio album by Hall & Oates, released in 1977. This album takes a more rock-oriented approach, similar to War Babies, but more streamlined and polished. After this small run of hits, Hall & Oates still encountered difficulty getting radio play. Despite touring constantly and recording albums with […]