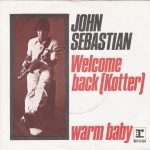 “Welcome Back” is a popular record that was the theme song of the 1970s American television sitcom Welcome Back, Kotter. Written and recorded by former Lovin’ Spoonful frontman John Sebastian, it reached No. 1 on the Billboard Hot 100 chart for one week in May 1976 after only five weeks on the chart, and also topped the adult contemporary chart (the show itself had become an instant ratings success upon its premiere the previous fall). It also reached No. 93 on the country chart. 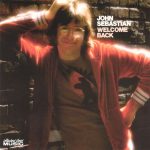