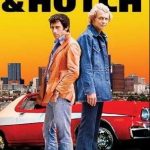 Starsky & Hutch is an American action television series, which consisted of a 70-minute pilot movie (originally aired as a Movie of the Week entry) and 92 episodes of 50 minutes each. The show was created by William Blinn, produced by Spelling-Goldberg Productions, and broadcast from April 1975 to May 1979 on the ABC network. It was distributed by Columbia Pictures Television in the United States and, originally, Metromedia Producers Corporation in Canada and some other parts of the world. Sony Pictures Television is now the worldwide distributor for the series. The series also inspired a theatrical film and a video game.