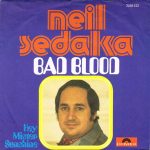 “Bad Blood” is a popular song written by Neil Sedaka and Phil Cody. The song, with uncredited backing vocals by Elton John, reached number one on the Billboard Hot 100 in 1975, remaining in the top position for three weeks. It was certified gold by the RIAA and was the most successful individual commercial release in Sedaka’s career. “Bad Blood” was replaced at the number 1 spot by John’s single, “Island Girl”.

The Hungry Years is an album by Neil Sedaka, the title of which is an eponymous track from the album. It was released by The Rocket Record Company in 1975. The album is the American edition of Overnight Success, with two songs being replaced. “Bad Blood,” a duet with Elton John, hit #1 on the […]