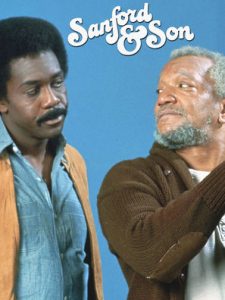 Sanford And Son is an American sitcom that ran on the NBC television network from January 14, 1972, to March 25, 1977. It was based on the BBC Television program Steptoe and Son, which had its original broadcast run in the United Kingdom from 1962 to 1965.

Known for its edgy racial humor, running gags, and catchphrases, the series was adapted by Norman Lear and considered NBC’s answer to CBS’s All in the Family. Sanford and Son has been hailed as the precursor to many other African-American sitcoms. It was a ratings hit throughout its six-season run.

While the role of Fred G. Sanford was known for his bigotry and cantankerousness, the role of Lamont Sanford was that of Fred’s long-suffering, conscientious, peacemaker son. At times, both characters involved themselves in schemes, usually as a means of earning cash quickly to pay off their various debts. Other colorful and unconventional characters on the show included Aunt Esther, Grady Wilson, Bubba Bexley and Rollo Lawson