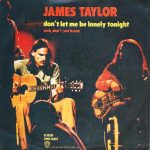 “Don’t Let Me Be Lonely Tonight” is a song written and performed by American singer-songwriter James Taylor, from his 1972 album One Man Dog. It was released as the lead single from the album, and peaked at #14 on the U.S. Billboard Hot 100 on January 13, 1973. It also reached #3 Easy Listening. In Canada, the song reached #18 on the Pop Singles chart and #7 AC.

The song has been included on three of Taylor’s greatest-hits collection albums: Greatest Hits (1976), Classic Songs (1987) and The Best of James Taylor (2003). Taylor re-recorded the song for the 2001 Michael Brecker album Nearness of You: The Ballad Book; this rendition won Taylor the Grammy Award for Best Male Pop Vocal Performance in 2002.

It has been recorded by various pop and jazz artists, notably The Isley Brothers and Isaac Hayes, along with saxophonist Boney James, whose version was also released as a single.

One Man Dog is the fourth studio album by singer-songwriter James Taylor. Released on November 1, 1972, it features the hit “Don’t Let Me Be Lonely Tonight”, which peaked at number 14 on the Billboard charts on January 13, 1973. The follow-up single, “One Man Parade”, also charted but less successfully, peaking at number 67 […]