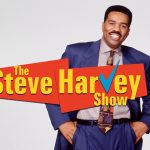 The Steve Harvey Show is a sitcom that aired on The WB from August 25, 1996 to February 17, 2002. It was created by Winifred Hervey and directed by Stan Lathan.

Steve Hightower (Steve Harvey) is a 1970s funk legend who is now a music teacher/vice-principal at Booker T. Washington High School on Chicago’s West Side. Budget cutbacks meant Steve also had to teach drama and art, much to his surprise. Cedric Robinson (Cedric the Entertainer) is a coach at the high school, and Steve’s longtime best friend. The principal of Booker T. Washington High is Steve’s former classmate, Regina Grier (Wendy Raquel Robinson), whom Steve affectionately calls “Piggy”, because of the fact that she was overweight as an adolescent.