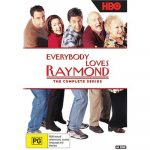 Everybody Loves Raymond is an American sitcom television series created by Philip Rosenthal that aired on CBS from September 13, 1996, to May 16, 2005, with a total of 210 episodes spanning over nine seasons. It was produced by Where’s Lunch and Worldwide Pants, in association with HBO Independent Productions. The cast members are Ray Romano, Patricia Heaton, Brad Garrett, Doris Roberts, Peter Boyle, Madylin Sweeten, and Monica Horan. Most episodes of the nine season series were filmed in front of a live studio audience, with a few exceptions.