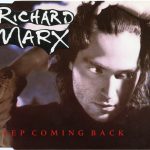 “Keep Coming Back” is a 1991 R&B-oriented hit song by American singer and songwriter Richard Marx. It appears on his third solo album, Rush Street, and was both written and produced by Marx. The lyrics to the song detail a man’s unrequited love for a woman. Working with musicians such as Luther Vandross (who added backing vocals to the track) and keyboardist Greg Phillinganes, Marx sought to explore different musical territory with this single, stating that “I wanted to write an old-fashioned R&B song.”