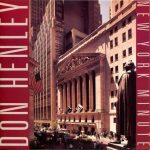 “New York Minute” is a song written by Don Henley, Danny Kortchmar, and Jai Winding. Henley originally recorded it for his 1989 album The End of the Innocence. The single was a #5 hit on the U.S. Adult Contemporary chart the following year, although it reached only #48 on the Billboard Hot 100.

The End of the Innocence is the third solo studio album by Don Henley, the lead vocalist and drummer for the Eagles. The album was released in 1989, on Geffen Records, this would be his last release on that label. It was also his last solo album of the 1980s and it would be eleven […]