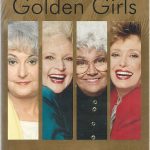 The Golden Girls is an American sitcom created by Susan Harris that originally aired on NBC from September 14, 1985, to May 9, 1992, with a total of 180 half-hour episodes spanning seven seasons. The show stars Beatrice Arthur, Betty White, Rue McClanahan, and Estelle Getty as four older women who share a home in Miami, Florida. It was produced by Witt/Thomas/Harris Productions, in association with Touchstone Television, and Paul Junger Witt. Tony Thomas and Harris served as the original executive producers.