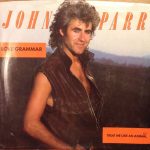 “Love Grammar” is a song by English singer/musician John Parr, released as the third of four singles from his 1984 self-titled debut album John Parr. The song was written and produced solely by Parr.

The song was released as the third single from the John Parr album in America. It was originally issued in May 1985, following the release of “Magical”, which had peaked at #73 on the Billboard Hot 100. However “Love Grammar”, like “Magical”, wasn’t played much on the radio, as all the stations were playing another Parr song; the soundtrack song “St. Elmo’s Fire (Man in Motion)”, which was released as a single in June of that year. The “Love Grammar” single was re-issued in November 1985, following the success of”St. Elmo’s Fire”, which went to number one on the Billboard Hot 100. The re-issue of “Love Grammar” found some commercial success, peaking at #89 in America. The song spent two weeks in the chart, after debuting at #92.