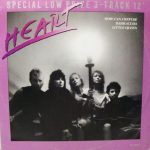 “How Can I Refuse” is a song recorded by the rock band Heart. It was released in 1983 as the first single from the band’s seventh studio album Passionworks. The song is an uptempo rock tune which lyrically addresses the strong feelings of infatuation at the beginning of a romantic relationship.

The song was Heart’s first 12″ single release in the UK, backed with “Barracuda” and “Little Queen”.

Passionworks is the seventh studio album, released by the hard rock band Heart, in 1983. The album marks a shift in musical direction from hard rock and folk to mainstream rock. This album spent 21 weeks on the U.S. Billboard 200 and reached No. 39. The single, “How Can I Refuse?” hit No. 44 on […]