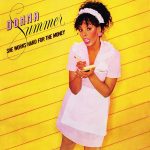 It became a hit for Summer and is one of her signature songs, reaching number one for a three-week stay atop the Billboard R&B singles chart (her first since 1979), number three on the Billboard Hot 100, and number three on the Dance Club Play chart. The single ended up as Billboard’s fifteenth-best performing song of 1983.[3] Summer performed the song live as the opening of the 1984 Grammy Awards.

She Works Hard for the Money is the eleventh studio album by Donna Summer, released in 1983. It was her most successful album of the decade, and its title track became one of the biggest hits of her career. After emerging on Casablanca Records as the foremost female star of the disco era of the […]