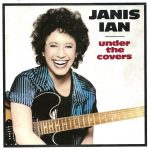 “Under The Covers” is a single by Janis Ian, from her album Restless Eyes. It was released in 1981 and peaked at #71 on the US Billboard charts.

Restless Eyes is the twelveth album by Janis Ian, released in 1981 on Columbia records. About the album: Although Night Rains had been a huge overseas hit, generating monumental income, Columbia executives were worried that Janis hadn’t broken the album in the United States. Faced with the choice of having a producer assigned to her […]