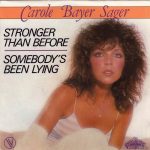 “Stronger Than Before” is a song by Carole Bayer Sager from her album Sometimes Late At Night. It was released in 1981 and reached #30 in the US Billboard Charts.

Sometimes Late at Night is the third and last solo album by songwriter Carole Bayer Sager, released in 1981. Singles from the album were Stronger Than Before (later recorded by Dionne Warwick and Chaka Khan), and Easy To Love Again. The producer and composer was Burt Bacharach. After this album, they married and wrote many […]