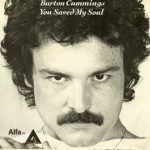 “You Saved My Soul” is a 1981 single by Canadian musician Burton Cummings, from the 1981 album Sweet Sweet. The single reached #12 on Canada’s Adult Contemporary chart.

Originally written and recorded for the film Melanie, which starred Cummings and Glynnis O’Connor as a man and woman entering into a romantic relationship, the song won the Genie Award for Best Original Song at the 4th Genie Awards.