A Taste Of Honey 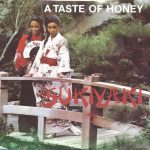 “Ue o Muite Arukō”  “I Look Up As I Walk”, alternatively titled “Sukiyaki“) is a song by Japanese crooner Kyu Sakamoto, first released in Japan in 1961. The song topped the charts in several countries, including on the Billboard Hot 100 in 1963. The song has grown to become one of the world’s best-selling singles of all time, having sold over 13 million copies worldwide.

The English-language lyrics of the version recorded by A Taste of Honey are not a translation of the original Japanese lyrics, but instead a completely different set of lyrics arranged to the same basic melody. Well-known English-language cover versions with altogether different lyrics often go by the alternative name or something completely different, including “My First Lonely Night” by Jewel Akens in 1966, and “Sukiyaki” by A Taste of Honey in 1980. The song has also been recorded in other languages.

A Taste of Honey vocalist Janice-Marie Johnson would recall how at age 9 she’d heard Kyu Sakamoto’s “Sukiyaki” on the radio in the summer of 1963 and said: “Mom! Buy me this record!”, as despite not understanding the lyrics she was deeply moved by the song. Constantly playing the single, Johnson phonetically learned its lyrics and taught them to her sister, with the pair participating in neighborhood talent shows singing “Sukiyaki” while performing their approximation of an Oriental dance number.

Twice As Sweet is the third album by American dance/R&B band A Taste of Honey. The album was produced by George Duke and released in 1980. It’s notable for the heavily sampled “Rescue Me” as well as the band’s cover of “Sukiyaki”, which concludes the album Tracks 1  Ain’t Nothin’ But A Party (George Duke, […]