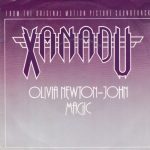 “Magic” is a 1980 song performed by Olivia Newton-John, from the soundtrack to the film Xanadu. The song was number 1 on the US Billboard Hot 100 for four weeks beginning on August 2, 1980. On August 30, it was displaced from the top by “Sailing” by Christopher Cross. It was Newton-John’s 25th American chart hit, and her 10th of 12 records which went Gold or higher.

“Magic” was also Newton-John’s biggest pop hit until “Physical” ruled the Hot 100 for ten weeks beginning in November 1981. Billboard magazine ranked “Magic” as the third most popular single of 1980, behind only “Call Me” by Blondie and “Another Brick in the Wall, Part II” by Pink Floyd. In Canada, the song spent two weeks at number one. It also reached number 4 in Australia and number 32 in the UK.

The song became Newton-John’s biggest Adult Contemporary hit to date, spending five weeks at the top of the American chart, and also topped the Canadian AC chart for a week.

John Lennon named “Magic” and “All Over the World” as two recent songs he liked in a Newsweek interview in September 1980, shortly before his death.