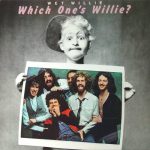 Wet Willie is an American band from Mobile, Alabama, U.S. They are best known for their hit “Keep On Smilin’,” reaching #10 on the Billboard Chart in August 1974, but had a number of charted songs in the 1970s utilizing their soulful brand of Southern rock.

Drummer Lewis Ross assembled the musicians for a group called “Fox” in the summer of 1969 and after relocating from Mobile, AL. to Macon, GA., home of Capricorn Records, became known as “Wet Willie”.  Wet Willie is a versatile, high-energy Southern rock band that, from 1971 until 1978, produced an array of albums awash in good-time music, rollicking high-energy blues-rock, and white Southern soul while releasing several charting singles and achieving one Top Ten hit and a lot of admirers. They toured and recorded extensively from 1969 through the early Eighties, and they still perform today in two slightly different versions, depending on whether Jimmy Hall is present. When Hall is with the band, it is billed as Wet Willie; otherwise, it is billed as The Wet Willie Band.