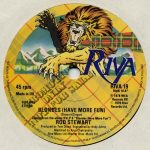 “Blondes (Have More Fun)” is a song written by Rod Stewart and Jim Cregan that was originally released as the title track of Stewart’s 1978 album Blondes Have More Fun. In some countries it was released as the third single off the album, following “Da Ya Think I’m Sexy?” and “Ain’t Love a Bitch”. It only reached the Top 70 in the UK, topping out at #63 but reached #23 in Ireland. The song was covered by Vince Neil on the Japanese version of his album Exposed.

Blondes Have More Fun is Rod Stewart‘s ninth album, released in November 1978. As was the popular musical trend at the time, it is Stewart’s foray into disco music, which although commercially successful, was critically divisive. The lead single “Da Ya Think I’m Sexy” became one of Stewart’s biggest hits, peaking at No.1 in both […]