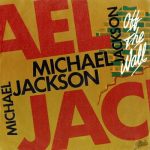 “Off the Wall” is a song by American singer Michael Jackson, from his fifth album of the same name (1979). It was written by English songwriter Rod Temperton and produced by Quincy Jones, and released as the album’s third single on February 2, 1980, by Epic Records. The song was first offered to Karen Carpenter, while she was working on her first solo album, but she turned it down. Lyrically, the song is about getting over troubles. It was well received by music critics, and became Jackson’s third top 10 single from Off the Wall, which eventually spawned four top 10 singles; Jackson was the first person to accomplish this. It was performed by Jackson in five of his concert tours.