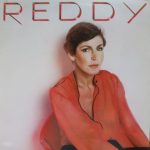 Reddy is the eleventh studio album by Australian-American pop singer Helen Reddy that was released in 1979 by Capitol Records. The album was noted by Billboard magazine for what set it apart from its predecessors: “It’s the three disco tracks on the first side of this album that will probably draw the most attention, but more interesting from the point of view of Reddy’s artistic growth are covers of soul ballads by Gamble & Huff (‘Sing My Heart Out’) and Eugene Record (‘Trying to Get to You’) and rock material by the likes of The Doobie Brothers (‘Minute by Minute’).” That same review from the issue dated June 2 of that year also mentioned the exposure she received from The Helen Reddy Special, which had just aired on ABC on May 22, but, as with her previous two releases, Reddy did not reach Billboard’s Top LP’s & Tapes chart. It was also her last album to chart in Canada’s RPM magazine when it peaked at number 97 there in August of that year

1 Trying To Get To You

3 The Magic Is Still There

4 Make Love To Me

6 Let Me Be Your Woman

8 Words Are Not Enough

9 Sing My Heart Out