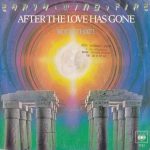 “After the Love Has Gone” is a 1979 hit single for Earth, Wind & Fire, written by David Foster, Jay Graydon, and Bill Champlin for the album I Am. It held the #2 spot on the Billboard Hot 100 singles chart for two weeks, behind The Knack’s smash hit “My Sharona”

One of the song’s writers, David Foster, worked on an album for Motown Records singer Jaye P. Morgan. The album was released in Japan and never took off in the United States. Foster later went to Motown to let the executives hear some of the material. Foster was in the middle of a song and ad-libbed the chorus to “After The Love Has Gone”, as he had forgotten the words. Foster and Jay Graydon then asked Bill Champlin to write lyrics to the music after Graydon had come up with an idea for the verse. At the time, Foster was producing Champlin’s 1978 solo debut Single for Full Moon/Epic Records and was working with Earth, Wind & Fire around the time they were recording their album I Am. Foster then showed Maurice White the song, which White loved and wanted to record. Foster and Graydon later told Champlin that the song was being pulled off his album for inclusion on Earth, Wind & Fire’s album – to which Champlin agreed to having the track removed.[2] According to former manager turned Sony Music Entertainment CEO Tommy Mottola, Foster previously offered the song to Hall and Oates, but they rejected it, as they weren’t interested in singing songs written by anyone other than themselves.

“David and I also recorded the song for the Airplay album, but that was not a problem since the EWF version was released before the Airplay album. By the way, the Airplay version is the original version of the song with the verses in the key of A. The EWF version verses are in the key of F, using a ‘shotgun pivot chord’ halfway through the B section as to get in the proper key for the choruses. Note that the EWF version features the high harmony part in the choruses, which makes the listener think that is the melody! That always bothered me since it is very difficult for one singer to sing the song as the vocal range is much too wide.”

Earth, Wind & Fire member Verdine White revealed that “After the Love Has Gone” was one of their most difficult songs to record:

“The track was based on a vibe. We cut it about six, seven times, and Maurice just said, “No, it’s not right yet. We’ll come back and get it tomorrow. It’s not right yet”. And then one day we nailed it, and it was right. The way it felt. It sounded like Earth, Wind & Fire”.

I Am is the ninth studio album by the R&B band Earth Wind & Fire, released in June 1979 on CBS Records. The album features the singles “Boogie Wonderland” with The Emotions and “After the Love Has Gone”. I Am has been certified double platinum in the US by the RIAA and platinum in the […]