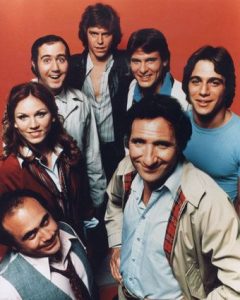 Taxi is an American sitcom that originally aired on ABC from September 12, 1978 to May 6, 1982 and on NBC from September 30, 1982 to June 15, 1983. The series won 18 Emmy Awards, including three for Outstanding Comedy Series. It focuses on the everyday lives of a handful of New York City taxi drivers and their abusive dispatcher. Taxi was produced by the John Charles Walters Company, in association with Paramount Network Television, and was created by James L. Brooks, Stan Daniels, David Davis, and Ed Weinberger.

Bob James wrote the opening theme, “Angela”, which had been intended for a sequence in episode #3 (“Blind Date”). The producers liked this slower, more melancholy tune better than the up-tempo opening theme they had originally chosen (“Touchdown”), and were able to make the switch before the first episode aired. Both songs are on James’ 1978 album, Touchdown.

In 1983, James released The Genie, an LP containing much of the incidental music he had written for Taxi during its run.