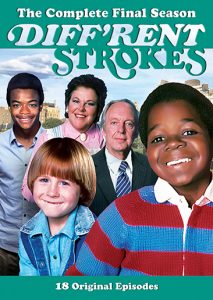 Diff’rent Strokes is an American sitcom that aired on NBC from November 3, 1978, to May 4, 1985, and on ABC from September 27, 1985, to March 7, 1986. The series stars Gary Coleman and Todd Bridges as Arnold and Willis Jackson, two African-American boys from Harlem who are taken in by a rich white Park Avenue businessman and widower named Phillip Drummond (Conrad Bain) and his daughter Kimberly (Dana Plato), for whom their deceased mother previously worked. During the first season and first half of the second season, Charlotte Rae also starred as the Drummonds’ housekeeper, Mrs. Edna Garrett (who ultimately spun off into her own successful sitcom, The Facts of Life).