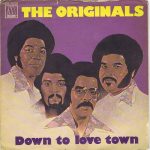 “Down to Love Town” is a 1976 disco single by The Originals, a Motown group that peaked in popularity in late 1960s and early 1970s. Although the single reached the #1 spot on disco/dance chart for one week, it hit #93 on the Soul Charts (where The Originals had previously found their success) but had a better showing on the Hot 100, peaking at #47. The song was written by Don Daniels, Michael B. Sutton and Kathy Wakefield and was track #2 on their 1977 album of the same name 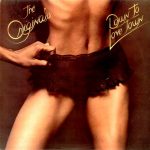