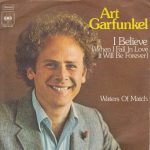 “I Believe (When I Fall in Love It Will Be Forever)” is a soul song co-written and performed by American singer-songwriter Stevie Wonder and Yvonne Wright, for Wonder’s fifteenth studio album Talking Book (1972). The song features in the 2000 comedy-drama High Fidelity starring John Cusack and Jack Black, and is included on its soundtrack.

Art Garfunkel covered this song in 1975 for his album Breakaway

Breakaway is the second solo studio album by Art Garfunkel. It was released in 1975 on Columbia Records. It was produced by Richard Perry who has produced albums for other artists such as Carly Simon. It includes three Top 40 singles: “I Only Have Eyes for You” (US #18, UK #1), “Break Away” (US #39) […]