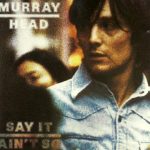 Say It Ain’t So is a solo studio album by Murray Head. It was released in 1975 on A&M Records. The album was produced by Paul Samwell-Smith, and the album features sleeve photography by Gered Mankowitz.

According to Head, he wrote the song about fallen heroes. He re-released the song in 1995 on the album When You’re in Love, and he wrote the following comment in the liner notes:

“Say It Ain’t So, Joe” was provoked by a seventies documentary on Richard Nixon prior to his resignation. The presenter was asking the editor of a small town newspaper outside Washington, how, in the face of conclusive evidence and proof, his readers could still show such undying support for the president they elected. The editor likens the situation to a scandal in the twenties, when Joe Jackson, the famous baseball player, was rumoured to have taken a bribe to sink his team in the final of the World series. His fans hung around the stadium chanting “Say it ain’t so Joe”.

The song is about heroes and their “Clay feet’. It is also a plea from myself to the kind of ‘Joe Public’ who in fear of losing face, refuse to relinquish their faith in a fallen idol.

The song is on an album, which has sold over a million copies and was produced by Paul Samwell-Smith, who recently decided to re-record the song. Shortly afterwards I was watching another documentary on the O.J. Simpson case and they showed a note pinned to his gate on which was written “Say it ain’t so Joe”. Two days later a friend, just returned from L.A., rang me to tell me they’d seen placards with that same old phrase. The occasion seemed apt for a re-release.

2 Boy On The Bridge

8 Silence Is A Strong Reply