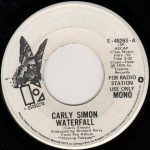 “Waterfall” is a song written and performed by Carly Simon, and produced by Richard Perry. The song served as the second single from Simon’s fifth studio album, Playing Possum.