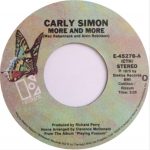 “More And More” is a single by Carly Simon, from her album Playing Possum, released in 1975. It peaked at #94 in the US Billboard Charts.

Playing Possum is singer-songwriter Carly Simon’s fifth studio album, released in April 1975. It was Simon’s third consecutive album to reach the Top 10 on the Billboard Pop albums chart, peaking at No. 10 in June 1975. The lead single from the album, “Attitude Dancing”, which featured Carole King on backing vocals, was also a […]