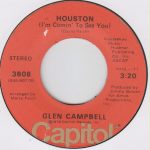 “Houston (Comin’ To See You)” is a single by Glen Campbell, taken from his same titled album, released in 1974. The song was written by David Paich and peaked at #68 on the US Billboards. The arrangements are from Marty Paich.

Houston (I’m Comin’ to See You) is the 26th album by American singer/guitarist Glen Campbell, released in 1974. Glen Travis Campbell (born April 22, 1936) is an American country music singer, guitarist, songwriter, television host, and occasional actor. He is best known for a series of hits in the 1960s and 1970s, and for hosting […]