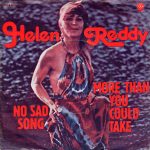 “No Sad Song” is a single by Helen Reddy taken from here selftitled album, released in 1971.