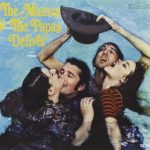 Deliver is the third studio album by the American folk rock vocal group The Mamas & the Papas, released in 1967. It charted at #2 in Billboard’s “Top Pop” albums for 1967. Three of the album’s singles ranked in the “Pop Singles” chart: “Dedicated to the One I Love” at #2, “Creeque Alley” at #5 and “Look Through My Window” at #24.

The album was first issued on CD in 1988 (MCAD-31044) and is included in its entirety on All the Leaves Are Brown, a retrospective compilation of the band’s first four albums and various singles.

The album’s title was an in-joke among the group, as recording commenced shortly after Cass Elliot announced that she was pregnant with her daughter, Owen. Given the social stigma of unwed mothers at the time, both the pregnancy and the birth had been kept a closely guarded secret from the public, and the LP’s name was meant to imply that Cass and the others had “delivered” a newborn creative creation.