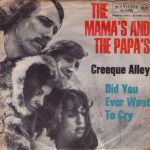 “Creeque Alley” is an autobiographical hit single written by John Phillips and Michelle Phillips of The Mamas & the Papas, and composed by John Phillips, in 1967, narrating the story of how the group was formed, and its early years. The third song on the album Deliver, it peaked at #5 on the U.S. Billboard pop singles chart the week of Memorial Day 1967. It made #9 on the UK charts and #4 on the Canadian charts.

Deliver is the third studio album by the American folk rock vocal group The Mamas & the Papas, released in 1967. It charted at #2 in Billboard’s “Top Pop” albums for 1967. Three of the album’s singles ranked in the “Pop Singles” chart: “Dedicated to the One I Love” at #2, “Creeque Alley” at #5 […]