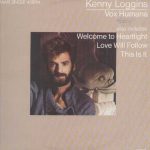 “Vox Humana” is a Kenny Loggins song from his 1985 album, Vox Humana. It was released as the leading single from the album, and peaked at No. 29 on Billboard Hot 100. This song represents Loggins’ musical experiment with synthpop and R&B swing, by working with The Pointer Sisters on composition and vocals. This is also one of the first songs produced by Loggins himself. Sheila E. also makes a guest appearance on the drums and percussions of the song.

Vox Humana is the fifth solo album released by soft rock singer Kenny Loggins. Released in 1985, it was Loggins’ first album released after his involvement with the hit soundtrack to the motion picture Footloose, the year prior. The title is from a Latin phrase meaning “human voice.” Among those who make cameo appearances are […]