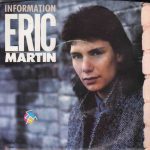 “Information” is a song from Eric Martin‘s selftitled album, released in 1985.

The selftitled album by Eric Martin was the second solo album, released in 1985 Eric Lee Martin (born October 10, 1960, Long Island, New York) is an American rock singer/musician active throughout the 1980s, 1990s, and 2000s both as a solo artist and as a member of various bands. He earned his most prominent success […]