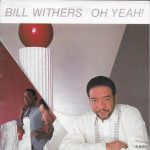 Oh Yeah! is the first single by Bill Withers from his album Watching You Watching Me, released in 1985.

Watching You Watching Me is the eighth album by Bill Withers, released in 1985 It featured the Top 40-rated R&B single “Oh Yeah”, and ended Withers’ business association with Columbia Records. Bill Withers stated in interviews that a lot of the songs approved for the album, in particular, two of the first three singles released, […]